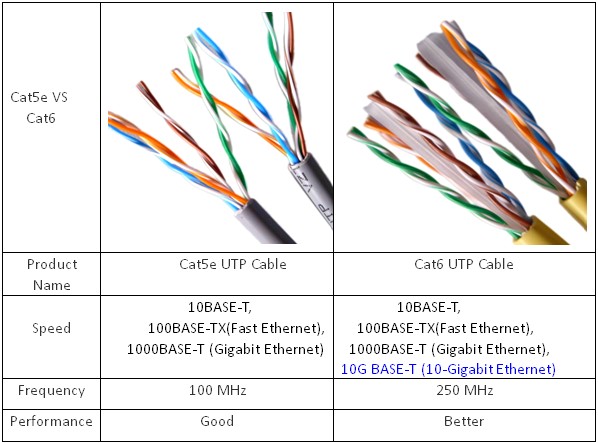 Support up to 10000Mbps transmission

Cat5: A Little Older, A Little Slower
Category 5 cabling, also known as Cat5, is an older type of network cabling. Cat5 cables were made to support theoretical speeds of 10Mbps and 100Mbps. You may be able to get gigabit speeds on a Cat5 cable, particularly if the cable is shorter, but it isn’t always guaranteed.

Since Cat5 is an older type of cabling, you probably won’t see them very much in the store, but you may have gotten some with an older router, switch or other networking device.

Cat5e: Faster with Less Interference
Category 5 enhanced cabling, also known as Cat5e, is an improvement on Cat5 cabling. It was made to support 1000 Mbps “gigabit” speeds, so in theory, it’s faster than Cat5. It it also cuts down on crosstalk, the interference you can sometimes get between wires inside the cable. Both of these improvements mean you’re more likely to get fast, reliable speed out of Cat5e cabling compared to Cat5.

Cat6: Even Faster
Category 6 cabling is the next step up from Cat5e and includes a few more improvements. It has even stricter specifications when it comes to interference, and its capable of 10-Gigabit speeds in some cases. You probably won’t use these speeds in your home, and the extra interference improvements won’t make a huge difference in regular usage, so you don’t exactly need to rush out and upgrade to Cat6. But, if you’re buying a new cable, you might as well, since it is an improvement over its predecessor.

We carry a wide range of Bicycles, Ebikes, e-scooters, cameras and kites are just something we have to make us a one-stop hub for your needs. It is our service that we pride ourselves on.

Follow us on Social Media to get latest update!